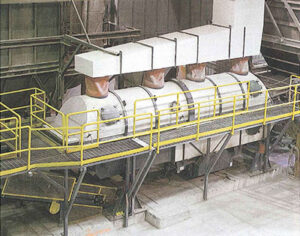 The temperature in the dryer’s 7-foot-long heating section is maintained at 750°F, which is more than 200°F hotter than the old dryers could achieve.

H. C. Spinks Clay Co., a division of Franklin Industrial Minerals, headquartered in Nashville, Tenn., mines and processes ball clay for use by companies that manufacture ceramic tile, whiteware, bathroom fixtures, and other fine porcelain and ceramic products. The clay is transported to one of the company’s three facilities located in Gleason and Paris, Tenn., where the various grades of clay are segregated and stored in sheds before processing. One step in the process at the Gleason facility-drying the clay in two 5-foot-wide-by-25-foot-long vibratory fluid-bed dryers connected in series—was proving to be a challenge for the company. The 30-year old dryers were inefficient, required frequent maintenance, and dried the material inconsistently. The company wanted to improve the material drying process.

To process the clay at the Gleason facility, the company first blends the various grades of clay together according to a customer’s specifications. The clay, which contains 17 to 20 percent moisture, is then run through a shredder and reduced to smaller particles. In the past, the clay was sent through the two vibratory fluid-bed dryers at about 25 t/h and dried to about 12 percent moisture. Because condensation is a problem in the cool winter months, the last 10 feet of the second dryer cooled the clay before discharge.

The cooled clay discharged to a short horizontal screw conveyor that conveyed it to a bucket elevator. The bucket elevator discharged the clay to a diverting chute. At this point, the company either diverts the clay to the other side of the facility where it’s stored in temporary storage bins before being loaded into railcars or to a roller mill that reduces it to a fine powder with about 2 percent moisture, which is then packaged for sale.

The company experienced problems maintaining the rigid air-plenum connections between the dryers’ multiple air inlets and the burner’s multiple hot-air ducts. The vibration created by the dryers’ fluid beds broke the connections and created holes that allowed hot air to leak out, increasing the drying energy costs. Hot air leakage also decreased the air pressure flowing into the dryer and led to inconsistent material drying. 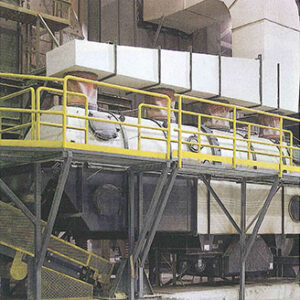 After being dried to 12 percent moisture, the clay discharges from the dryer’s cooling section to an inclined belt conveyor (bottom left).

“The clay on the bottom of the material bed was always hotter and dryer than the clay on the top, which was cool to the touch,” says Sam Cox, H.C. Spinks safety and environmental director.

The dryers also experienced frequent structural cracking, spring breakage, and drive failure. To repair these problems, the company had to shut down the dryers and the clay processing line. The subsequent downtime decreased process efficiency and production output, and the cost of the replacement parts, along with the time and labor spent maintaining the dryers, increased maintenance costs.

“We tried several different solutions from the original dryer manufacturer to maintain and repair the connections and other problems,” says Cox. “We also had various after-market suppliers come in and make suggestions. But we never found anything that worked to our satisfaction.”

The company also experienced regular maintenance problems with the screw conveyor and bucket elevator, which required shutting down the dryers and clay processing line to repair. This also decreased process efficiency and production output and increased maintenance costs.

Looking for a new dryer

The company realized that it needed to replace the old dryers with a more efficient, less maintenance-intensive dryer. At the time, a representative from Carrier Vibrating Equipment, Louisville, Ky., was visiting the Gleason facility for another project, and Cox asked the rep about the dryer problem. Carrier manufactures vibratory fluid-bed dryers, conveyors, and other process equipment.

“We were originally just looking for replacement parts for the connections, and the Carrier rep said that they had a part that would work,” says Cox. “But after we looked into it, we found that the parts were quite expensive. So at that point we said that if it’s going to cost us so much to replace all these parts and we’re still going to have the old dryers, why not buy a new dryer? So I asked the rep for a quote on a new vibratory fluid-bed dryer.”

The supplier developed a preliminary quote based on its experience with the company’s material. The company liked the initial quote and sent a couple of hundred pounds of clay to the supplier’s test facility for testing.

In January 2001, Cox traveled to the supplier’s test facility and watched the tests, in which the supplier used a pilot-scale vibratory fluid-bed dryer. The supplier ran tests using different parameters and settings and scaled up the results to accurately size the dryer that the company would need to efficiently heat and dry the clay and then cool it to the appropriate temperature before discharge. The tests determined the dryer’s overall size, the size of the dryer’s heating and cooling sections, the material feedrate, and the material depth on the fluid-bed deck. The company was satisfied with the test results, and, in March, placed an order for one vibratory fluid-bed dryer.

The new dryer is approximately 5 feet wide by 12 feet tall by 25 feet long. A 5-foot-wide vibrating fluid-bed deck, also called a distributor plate, is installed inside the dryer. The deck runs the dryer’s length and divides it in half, creating a top and bottom section. The deck has tiny holes drilled through its flat surface, allowing air to flow from the bottom section to the top section. The number, size, and pattern of the holes determines the air movement through the material on the deck. The bottom section has several air inlets along the length of one side for high-pressure air to flow into the dryer’s bottom. The top section has several exhaust ducts to vent the air after it passes through the deck and material. The air isn’t recirculated, but is vented from the facility.

A solid metal plate mounted vertically in the bottom section between the deck and dryer’s bottom divides the dryer into a 17-foot-long heating section and an 8-foot-long cooling section. A blower forces hot air from the burner through the heating-section inlets to heat and dry the clay on the deck. The heating section’s temperature is maintained at 750°F, which is more than 200°F hotter than the old dryers could achieve. Another blower forces ambient air from the plant through the cooling-section inlets to cool the clay before it discharges, preventing condensation problems.

Installing the new dryer in the clay processing line allowed the company to eliminate maintenance-intensive equipment and improve plant conditions. Cox says, “The dryer has been operating well and has had no maintenance problems since we made the minor adjustments before startup. The dryer has really cut down our maintenance costs and process downtime, which has increased production outputs.”

Because the dryer’s controls are programmed to adjust for moisture-content and feed-volume fluctuations, the dryer has increased the clay processing line’s product quality. “The new dryer dries the clay more uniformly than the old dryers did,” says Cox. ”With the old dryers, the clay’s final moisture content was really just an average, because they’d dry the clay on the material bed’s bottom to about 8 percent moisture and the clay on the top to about 16 percent moisture, which averaged to about 12 percent moisture. However, the new dryer’s high-pressure high temperature air, combined with the fluid-bed deck’s vibratory motion, dries every clay particle equally, so regardless of where the clay particles are on the material bed, they’re all dried to about 12 percent moisture. This gives us a better product.”

The dryer also dries the clay more efficiently than the company’s previous two dryers could. “The new dryer is more efficient because it uses higher air temperatures, has an improved fluid-bed deck design that provides better air distribution and heat transfer, and has an improved vibratory drive,” says Steve Baker, Carrier sales manager. “And even though the company is using the same dual-fired burner to heat the air, the new dryer decreased the company’s fuel use and increased its energy efficiency. To achieve this, the company only had to modify the blower that injects the air into the burner, because the dryer requires less airflow at a higher pressure.”

About 3 months after installing the new dryer in the Gleason facility and seeing how well it functioned, the company decided to replace an old 60-foot-diameter rotary dryer in its Paris facility with one of the supplier’s vibratory fluid-bed dryers. The second dryer, along with a new burner, was installed in the Paris facility in March 2002 and has decreased maintenance costs and increased drying efficiencies and production output at that facility.